More and more frequently I come across people who express an interest in R, and I thought I would share some advice to help people decide if R is something they should use, as well as some high level advice on getting started.

Most of these people are developers with at least few years experience writing code for a living, and this advice is directed to people like that. Perhaps you have a specific project in mind, or perhaps you’ve just seen the increasing amount of hype around data science and are wondering if you should take a look.

R has some great strengths, but there are some definite quirks, and I hope I can provide some advice and perhaps avoid some pitfalls along the way.

As a generalisation I find statisticians a generally friendly bunch of people, very open to discussions on all things and somewhat introspective. They are also generally very smart. Statistics can be quite an intricate field, especially as you get deeper into it.

Just as some background on me, I have worked as a developer for roughly 15 years now, and the R world makes a change from angry UNIX programmers and aggressive investment banking types that I spent the first 10 years or so working with.

I am sure some people will disagree with at least some of my views here. There may or may not be a technically correct or true answer, instead it is a subjective outlook, so keep in mind this is just one persons view.

A brief history of R, and why it has become so popular in certain circles

R is certainly becoming more and more popular, and seems to have found widespread adoption within many statistical research communities.

This is a great thing as it means as new statistical methods or practices come out of the research world, they are often implemented and available in R. In many cases they have been written by the person who “wrote the book” (or paper) on a given topic.

Why has it become so popular? I read a story somewhere about life in the academic research world.

In the past someone would do some cool research and publish their results, but they used proprietary statistical packages that might cost thousands of dollars.

This meant it was very hard for other researchers to replicate and carry further the work, and it is easy to see this would be a real pain.

People realized that by adopting R they could make their work freely available to others. This resolved an issue that was arguably a material roadblock to advances in the field.

R has really opened up a new world of statistical computing. It can do some very advanced things, and is all freely available.

I never did any statistical work before R, and academic statistics is not really my world so I am a little hesitant to write on this topic. If you are interested in this subject, you might also like to read Why Use the R Language.


I made a small flowchart on draw.io to assist with this question 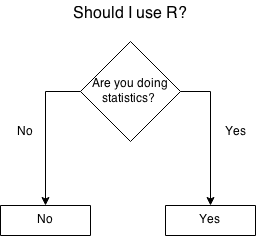 Where “statistics” can mean machine learning, predictive analytics, data science, anything that falls under a rather broad umbrella.

I view R as a statistical computing environment, versus a general purpose programming language like C++.

I am not saying it is technically impossible to do these things with R, but for a variety of reasons, other languages are likely a better choice.

However, if you have a big blob of data you want to understand better, glean insight from, or use for predication, R is an excellent choice.

This is the second requirement before deciding R is the right choice, that is you actually have some data you wish to analyze or model.

I would actually take this a step further and say your data is in a tabular format, i.e. you can represent it with columns and rows. If not, you can of course still use R, but you will be doing a lot of legwork that may be overwhelming.

R is designed for statistics, and a big part of applied statistics involves analyzing observations. Usually this manifests as a table like data structure such as a matrix or data frame in R.

Much of R is built around the assumption you are working with a table-like data structure.

This is different from conventional software development where you think about the task at hand, design a bunch of data structures/objects then define relations and operations between them to achieve the desired outcome.

Now again, it’s not that you can’t do this in R, and I will talk about OO a little later, but you might be better off doing heavy lifting in some other language and saving R for just the statistics parts.

It's just not really the sort of language you pick up and write a twitter clone/text editor/mp3 player or whatever your favourite "get to know a language" project might be.

If you can agree with this sentence: “I have some data that makes sense to represent in a tabular like structure, and I want to do some cool statistics stuff with it” R is definitely a good choice.

From here on in I will just provide some general advice as bullet points. I could write at length about all of them, and am happy to expand on any of them, but I will try to keep it brief.


R is a niche language, but if your work falls within that niche it is a wonderful tool. There are some great packages, cutting edge methods, and a generally enthusiastic and welcoming community.

You can also find many of these things in other languages like Python and Java, but I still find myself turning to R when I have a bunch of data I want to explore and just try out a bunch of different things.

Some other people have written on this topic, if you would like to read more see R Language for Programmers, R The Good Parts & Why R is hard to learn.

[Update] A previous version of this post said Hadley Wickham and Dirk Eddelbuettel were R Core Developers, which is not the case. They are members of the R Foundation.

As always, you can find me on twitter here.
Posted by Pete at 5:08 AM