On a scale of one to straight up voodoo, Hidden Markov Models (HMMs) are definitely up there for me.

They have all sorts of applications, and as the name suggests, they can be very useful when you wish to use a Markovian approach to represent some stochastic process.

In loose terms this just means we wish to represent our process as some set of states and probabilistic transitions between them.

But what if we don’t know this information? What if we just have a set of realizations from some process and a vague idea of the number of states that might be behind it?

Enter HMMs. Among other things, they can be used to determine the state transition probabilities that underlie some process, as well as the distributional parameters for each state.

That is, it can work out all the details that are "hidden" from an observer of a process. All we really need to do is specify how many states we think there are.


To test this out, and to get more familiar with the depmixS4 package, I made a small test program. It creates an observation series with:

The aim is to use depmixS4 to estimate all this information, which should help get a grip on how to use the package, and also let us see if HMMs are actually any good.

We have two states, lets call them S1 and S2. They were setup with the following properties

A trajectory was sampled, and depmixS4 used to fit a HMM. It provided the following estimates

You can see it did a pretty good job of recovering the true values.

In the following plot, you can see the sample trajectory, the estimated state from the HMM and the actual state used to generate the sample. This example worked very well, it’s not always the case that things turn out so nicely. 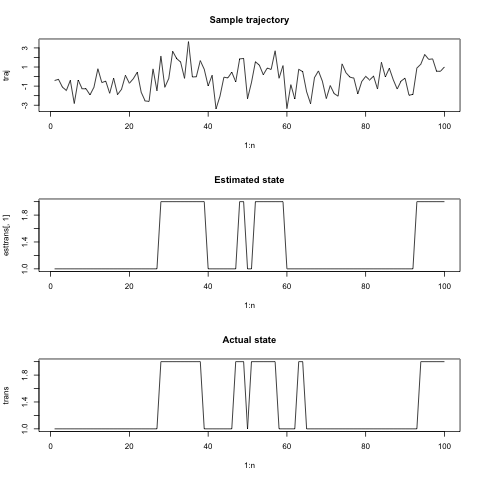 Voodoo I tell you!


There is no guarantee that a fitted HMM will be of any use, and even with this simple example, the state estimates can be wildly inaccurate. You can try this for yourself by using different seed values.

This example is based on one from the book Hidden Markov Models and Dynamical Systems, which I found to be an excellent resource on the topic. It is clearly written, covers the basic theory and some actual applications, along with some very illustrative examples. Source code is provided in python.

I've read (or at least tried to read) pretty much every book on HMMs I could find, and found this one to be the most useful if you are new to HMMs and are interested in applications.

You may also find these other posts about HMMs useful as well:

There is also the classic paper by Rabiner.

Hopefully this has shed a bit of light on HMMs and the depmixS4 package. Code is up here.