Digging into the VIX


I wanted to revisit using some sort of volatility filter for systematic trading. In particular, if we are trading SPX, can we somehow use the VIX to produce better risk adjust returns? This is not about trading volatility, but more about using additional "out of band" data in our systems.

I thought I would take a look at the VIX, what is it, and can it help us?

In theory, the VIX is the market consensus of what future 30 day realized volatility of SPX will actually be, as derived from option prices of SPX. Anyone who watches or trades SPX has seen that a drop in SPX usually results a rise in VIX, or the IV in SPX option chains.

Occasionally this relationship breaks down, which can be a useful as an indicator in itself, but I had a sneaking suspicion that the VIX would have more in common with historical vol than what realized vol turns out to be over the next 30 calendar days. That is, the VIX is not particularly useful as a longer term forward looking indicator of volatility, at least no more than current historical volatility.

I did a bit of data gathering and calculated realized and historical volatility for SPX. I used 21 periods when calculating vols as the VIX covers 30 calendar days, which is roughly a month, and there are roughly 21 trading days in an average month.

First of all, we can take a look in hindsight at how well the VIX forecast of volatility matched the actual realized volatility over the next 21 days. 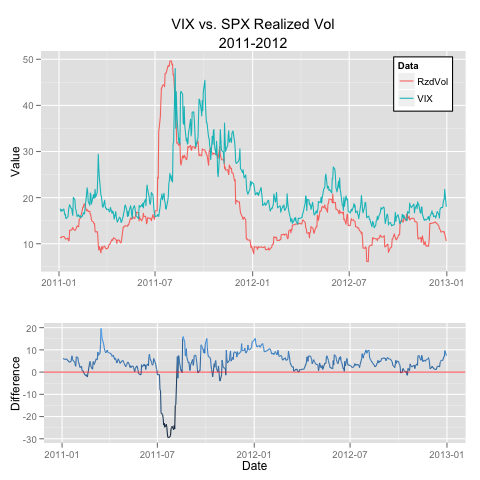 In this chart, the red line is what realized volatility turned out to be, going forward from a given day. It is impossible to know this in advance, so we are engaging in some serious data snooping, for educational purposes only. The teal line is the VIX. Below them is a plot of VIX - SPX realized vol, and flagrant abuse of gradients.

You can see that the VIX gives an estimate that is typically higher than what actually eventuated, a well-known phenomenon, which for convenience I will put in "The Volatility Risk Premium" basket.

There is one big divergence around the end of July, 2011, when the VIX was significantly underestimating what realized vol would actually turn out to be.  In August 2011 there was a large selloff and you can see the VIX jumped to a rather ebullient level.

If we moved the red line forward 21 periods, we would get historical volatility, that is, the actually volatility that occurred over the last 21 trading periods. 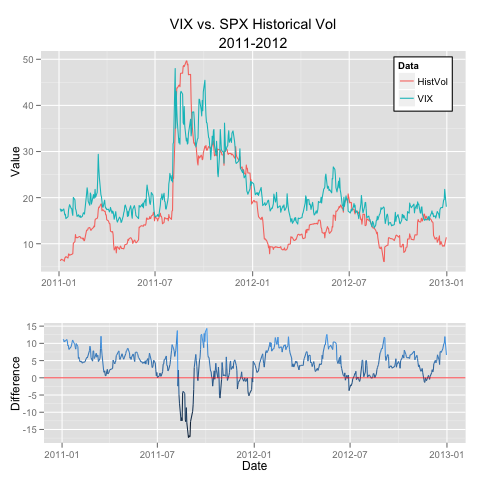 We can see the relationship is much closer. The VIX still generally reflects a premium over historical volatility, but big moves in the underlying SPX correlate to big moves in VIX/IV.


The correlations between these three measures, IV, RV and HV are worth taking a look at. This is using data from January 2000 up to about the end of January 2013:

Now because these are all measures of very similar things, we might expect high correlation. Another metric we could use too look at the relationship is R-Squared.


From all of this, I concluded that the VIX is not a particularly useful indicator of 30 day future realized volatility. However, it is a reasonable estimate of what historical volatility was.

This will turn out to be quite useful, as we may find ourselves trading instruments that do not have nice, readily available VIX equivalents, but that is a topic for a subsequent post.

So ends part 1. These posts turned out very long so I decided to split them up, part 2 should be available here.

The R code for this and the next post is up here.