What can we use the VIX for?


In part 1, we took a look at VIX and the relationship it had between historical volatility and realized volatility.

Continuing on, I thought I would take a look at next day returns and the VIX. There is a relationship between SPX and VIX in that when SPX drops, VIX typically rises. This leads the question: does a high VIX serve as a useful indicator of what might happen to SPX the next day?

A problem in answering this is quantifying what we mean by a "high" VIX. A VIX of 25 might be high if it has been under 20 for the last 3 months, but might be considered low if it has been around 30.

To deal with this I use a proportional measure based on its previous trading range. If it is at the top of its range, it gets a 1, and at the bottom it gets a 0. Anywhere in between it gets a number between 0 and 1.

I used data from 2000-2013 and a 252 period lookback, which is roughly 1 year, recording the next day return of SPX. I split this data into 5 groups, the first with relative VIX readings up to 0.2, the second between 0.2 and 0.4, and so on up to 1.0. Then I plotted the next day returns as a boxplot, giving the distribution of returns for a VIX reading in its relative quintile. 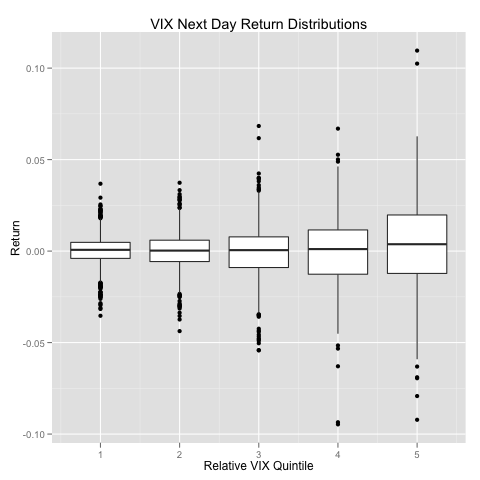 One thing that jumps out to me is that the mean of all these returns is more or less zero. Using this relative measure of VIX has no value as a predictor of next day returns, as whatever measure we use, a mean return of zero will see us end up flat (or in practice, probably down a bit). If there was a real edge, we would expect the mean return to be somewhere other than zero.

The second thing that I notice is the distribution of returns is a lot wider for the right most two boxes, which corresponds to relative VIX measure above 0.60, i.e. relatively higher volatility. Now this makes sense, as we would reasonably expect periods of higher volatility to have higher volatility.

It seems that high readings of VIX can serve as a useful predictor of higher periods of next day volatility, and for someone trying to implement a volatility filter, that could be quite useful.


To recap, we have seen that:

1) VIX is not very good at forecasting 30 day realized volatility.
2) Historical volatility can be a reasonable proxy for IV/VIX.
3) Higher periods of volatility do portend continued higher volatility, at least for the short term (1 day).

Note that 3 does contradict the mean reversion of volatility, because it is looking at the next day returns only. Over a longer period we would certainly expect it mean revert, otherwise we'd be experiencing some very, very bumpy rides ...

Also, I did similar analysis using RUT & RVX and NDX & VXN, both of which had very similar results. We will take a look at them in the next post where we use the findings from this post and the previous to implement a volatility filter.

Code for this post and the previous is up: here
Posted by Pete at 3:41 AM